There is a common objection to naturalistic Evolution called the Anthropic Principle. Essentially, it points to the fact that our world appears to be “finely tuned” to support life. We can consider all kinds of examples... that the Earth is not too close nor too far from the sun, or that the atmosphere has a perfect balance of oxygen and nitrogen. If you do some research into the Anthropic Principle, you come up with a vast number of examples like this, such that it becomes evident that the probability of all these things coming together is unimaginable. Add that to the improbability of Evolution itself, and even Richard Dawkins has a problem he can’t escape. So he is forced to address the problem in his book “The God Delusion”, and I think it is here that he fails most to find a solution to the problem he faces. Firstly, Dawkins subtly suggests that there are really only “six constants” which need to all be finely tuned for life to be possible. He’s referring to Martin Resse’s “Six Numbers”; six constants, like the speed of light, which must be finely tuned. I’m sure he’d acknowledge that there are far more things than this, but possibly in the name of keeping his book succinct he actually dumbs-down how dramatic the Anthropic Principle is. However, the way he solves the problem is very interesting. He uses the “multiverse” theory. This is the idea that an infinite number of universes exist, such that in at least one (our one) all of these constants (whether there were just six or thousands) are perfectly tuned for life. The idea itself is problematic for Dawkins because to postulate that our whole universe is a subset of a larger reality allows for the possibility that in that larger, imperceptible reality, God exists. Dawkins seems to recognize this...

"If we are going to permit the extravagance of a multiverse, so the argument runs, we might as well be hung for a sheep as a lamb and allow a God."

His response is not completely logical...

"People who think that have not had their consciousness raised by natural selection. The key difference between the genuinely extravagant God hypothesis and the apparently extravagant multiverse hypothesis is one of statistical improbability. The multiverse, for all that it is extravagant, is simple. God, or any intelligent, decision-taking, calculating agent, would have to be highly improbable in the very same statistical sense as the entities he is supposed to explain." 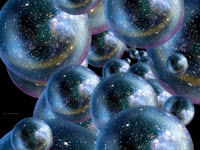 So Dawkins claims that “The multiverse, for all that it is extravagant, is simple.” This is something I would seriously challenge. He suggests that our universe began simple, just as all universes in the multiverse do, but became complex. But the multiverse itself must surely be complex. How are all these universes organised? Is a human body, made of "simple cells", itself simple? And frankly, what's simple about a cell? And is a cell, made of "simple atoms", itself simple? And what's simple about an atom? Even an atom is not simple. These are only simpler by comparison to the "organism" they are part of. No matter how simple you imagine our own universe could possibly be, and yet still have the capacity to evolve life, it would by no means be simple. How many people can follow the logic and mathematical equations of physicists like Einstein or Hawking? There's nothing simple about it. But then Dawkins further complicates things with the idea put forward in his book that universes reproduce, and their offspring share hereditary traits from both their parents! And so natural selection occurs at the “celestial level”, so to speak. But this just makes the multiverse incredibly more complex again.

Dawkins’ main argument against God being responsible for the fine tuning of our universe is that a being capable of tuning our universe is, Himself, far too complex to have come into existence. However, we don’t say that God ever came into existence, but that He has always existed. Evolutionists are blinded by the assumption that simple things become complex, or that complex things are assembled from simpler things. But they’re only simple in comparison to the whole. Even an atom and the forces which bind it together is incredibly complex. It actually makes more sense that a complex being is responsible for the design of simpler things. But in any case, God is not material and is subject to different laws, and so Dawkins cannot even say that the probability of something spiritually complex coming into existence is small. If Dawkins posits that other universes may exist then there is a far greater probability, according to Dawkins’ own science, that there is a God; because other universes subject to different laws may produce something phenomenally more complex than man... God Himself. Of course, according to the Christian faith, I say again, God never came into existence at all, but has always existed.